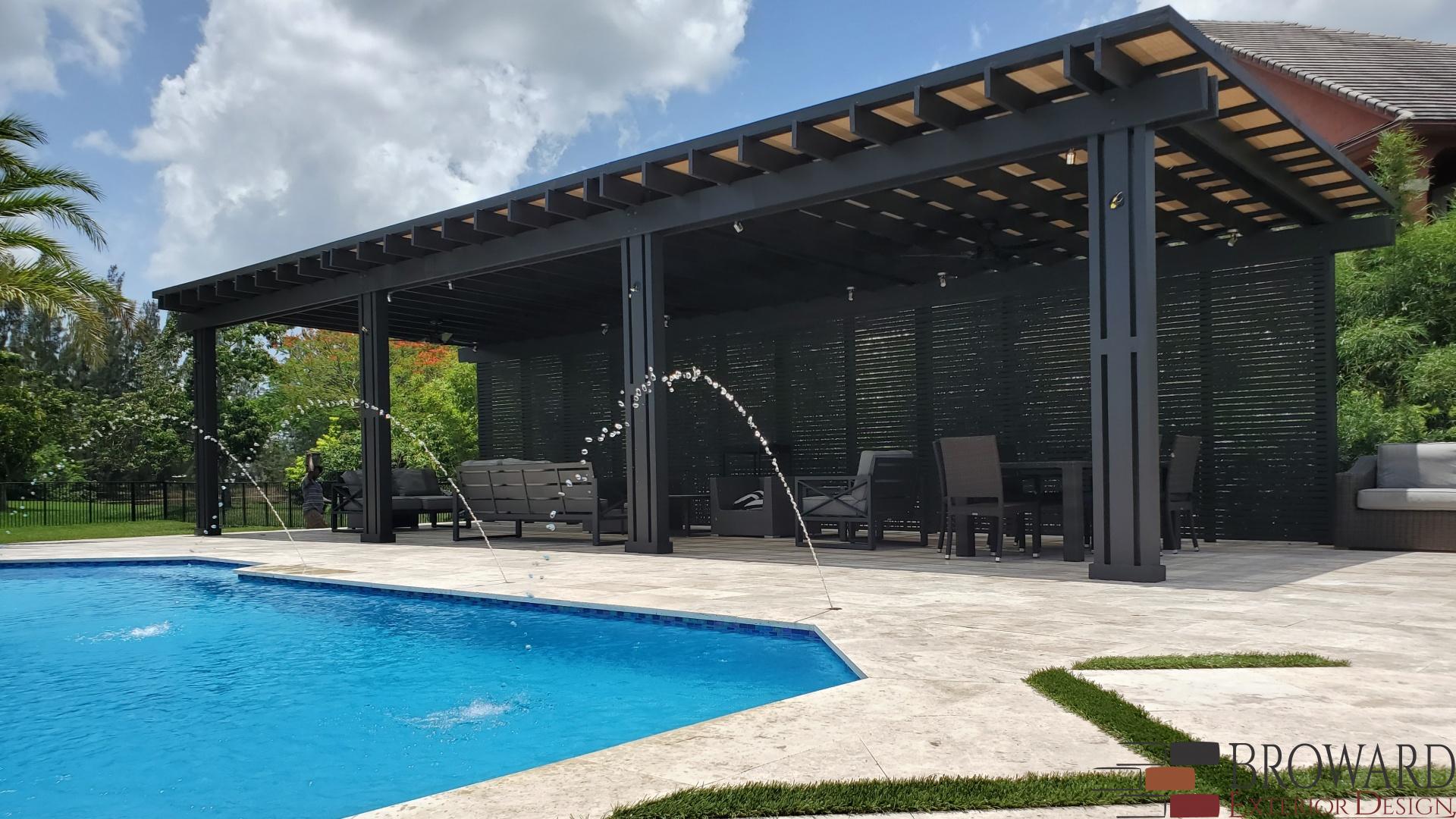 Find on this page the Pergolas services we provide in the counties of Broward, Palm Beach, and Miami Dade. Exceptional value.

We build wooden and aluminum pergolas. They are a great way to make any space look beautiful, providing not only shade but an exceptional design to your exterior. Pergolas are built on nice concrete footings.

We can provide any kind of wood, including Yellow Pine, Cedar, and Ipe of different dimensions, so they accommodate your project.

They can be attached to the house or freestanding. We will help you find the best location and shape. Our crew follows all the building steps smoothly to guarantee a satisfactory project.

We have an amazing team of experts, who will make any project a very pleasant experience. Our office is located in Broward County at Southwest Ranches FL. We also operate around Palm Beach and Miami Dade county. 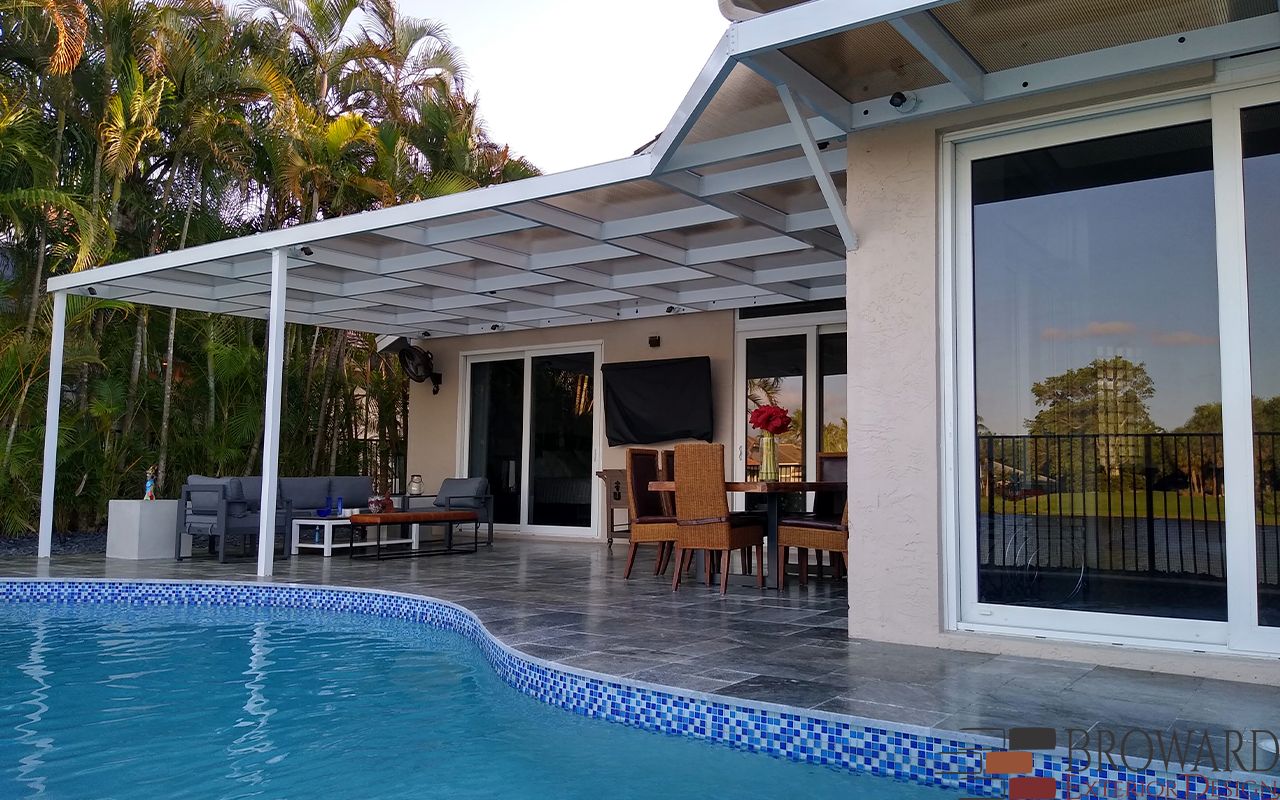 Pergolas are one of the most versatile architectural elements for the exterior of a single-family house. Its applications are very diverse and range from a simple shed for the outside area of the garage, to a shaded area by the pool or in the middle of the garden.

A pergola is an architectural and structural element. They are characterized by being formed by a kind of corridor or passageway, framed by a series of pillars that support longitudinal beams, which serve as a union and roof. These beams are supported by others that make up the open trellis typical of pergolas.

This type of structure was traditionally an extension of the house and was often used as a support for climbing plants and vines.

These were already used in Egypt thousands of years ago, although what we know as a pergola, nowadays, is what is beginning to be seen in 15th century Italy. It is a structure that has evolved a lot over the years and has been gaining weight and value in modern buildings.

The Romans also adopted the custom of building pergolas in their villas and country houses. That is why the name of this structure comes from the Latin, ‘pergula’, a word that refers to a balcony with plants.

The word evolved etymologically to ‘pergola’ (an Italian word) or ‘parra’ and ’emparrado’ in Spanish, as a place where these plants were left to grow. Nowadays, we use the Spanish word in the colloquial field, while the Italian term, we adjust it to a more technical or cultured vocabulary.

Throughout history, there are different vestiges of the use of these structures. For example, in the High Middle Ages, we could find the so-called ‘green tunnels’, which could be considered the most rustic or country version of these. These were formed by a trellis, the result of the bending of the flexible wooden pillars themselves.

Pergolas have had moments of splendor throughout their history, but perhaps the most remarkable moment is the period between the late eighteenth and early nineteenth centuries in England. These structures were the basis and fashionable element in all the private gardens of the stately homes of the Victorian era.

However, nowadays, its use has spread and there are many possibilities that this structure offers. While the old ones were built exclusively with wood and other elements of vegetable origin, nowadays they are manufactured in different materials: from specially treated wood for outdoors to aluminum or steel. 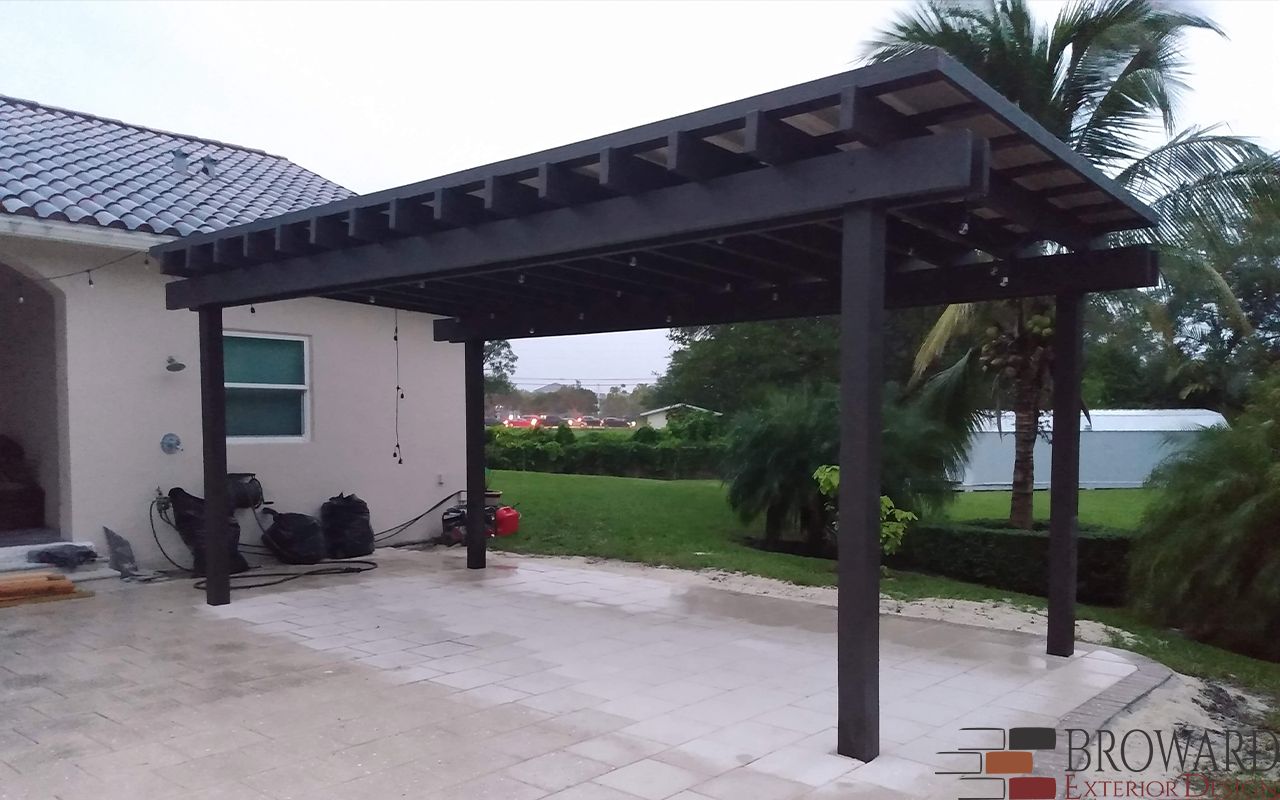 The use of pergolas in the garden or even on the terrace allows the optimization of space, but choosing the perfect pergola can be a complex job, the alternatives are varied and each one offers different benefits, but knowing each one is the first step to make the right decision.

Pergolas are classified according to the material used during the manufacturing process of the same, likewise, the process or form of construction itself can make a big difference.

Types of pergolas according to their structure.

There are pergolas that are attached to the facade of the house, these can be called continuous or attached, and there are the independent pergolas, those that can be located in any corner of the garden of the house that you consider relevant.

Types of pergolas according to the construction material.

Types of pergolas according to design.

The structure and the material are not the only factors that allow classifying the pergolas, the design is also an aspect to be considered, for example, there are those who choose pergolas with rustic designs, others are inclined towards colonial, vintage, modern designs.

The choice of the ideal design will depend on the garden or terrace where it will be installed and the final finish you want to obtain with these.